An assembly involving the vinyl spinning platter and the cartridge picking up the music scratched into the record is a turntable. A turntable requires a different preamp, amplifier, and separate speakers to play records. It is not an all-in-one music retrieval system.

The turntable reads and converts the grooves that are etched into the record into a small electrical signal called a PHONO signal. The preamp boosts the turntable’s tiny PHONO signal so that it can be connected to an amplifier or receiver. If a preamp is built into the turntable or amplifier, which is often the case, then a separate preamp is not required.

The principal components of a turntable are the plinth, the platter, the tonearm, the cartridge, and the speed selector. Depending on the model, there may be extra components, but these form the fundamental components of every turntable.

The turntable is an extremely useful component to own as compared to other things. A lot of people own audiophile turntables due to their smart design which logically gives reason to the fact to look over some of its processes and things.

How to Hook Up Turntable to Receiver Without Phono Input 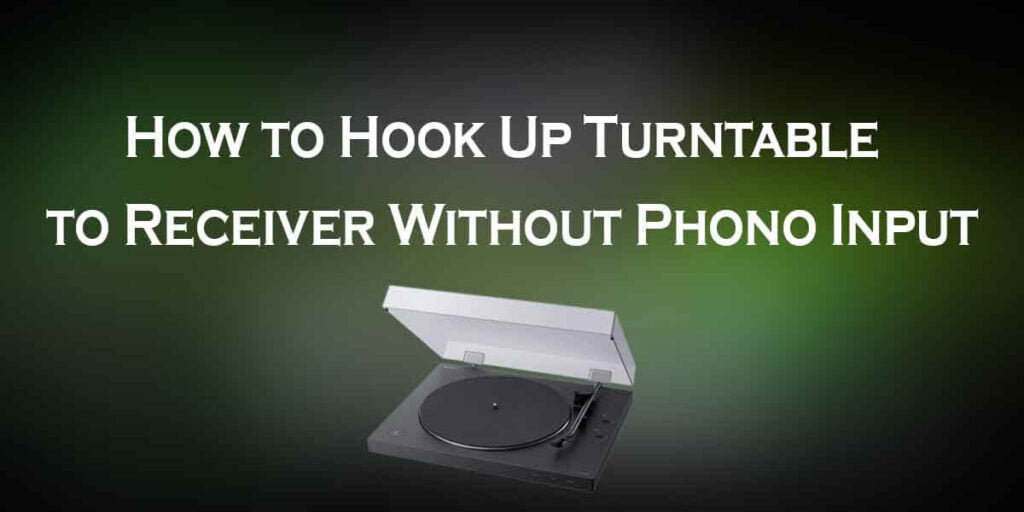 Receivers that are considered modern like tape decks or CD players which are considered Modern come with jacks that can be connected to the pre-amplifier devices. Devices like turntables require their signal to be amplified to produce volume. These devices are considered old school.

Taking everything into consideration, this is the part where a preamp comes into the show. The job of a preamp is to improve the signal which is coming from the record player or any other device. It improves the signal to a degree that it can be heard on the speakers. The job of the preamp can be done by any old stereo considering it has its stereo cables.

The turntable can be hooked to a receiver without the input of the phono in the following steps:

Step 1: Turn the power off

Turn the power off of your receiver, turntable, and pre-amp.

Step 2: Connect the Turntable to Preamp

The two output audio cables coming from the turntable are attached to the preamp inputs.

Step 3: Connect Preamp to the Receiver

Connect two wires, one wire to each source, to the preamp outputs. Attach the other end of these cables to the line-level inputs of the receiver. Line or Aux can be called the receiver inputs. When using the turntable, switch the receiver’s input-select knob to this setting.

Connect the turntable’s ground wire to the pre-amplifier grounding pin.

Switch the power on to the receiver, turntable, and preamp.

The consistency differs if both the instruments (turntable and record player) are taken into comparison. Typically, the construction efficiency of turntables is higher than that of record players. To last, turntables are made, but the record players are portable and lighter in weight. When compared to a turntable, they are often low-priced. There are many record players made with decent quality on the market, but they are not that prevalent on the market. Turntables last much longer and are more effective.

The sound quality varies from device to device. The quality of a record player in sound is usually considered to be very low. This is mostly due to the small speakers which are attached to an extremely small amplifier. A record player is not able to produce the bass of the song.

It is easy to purchase a turntable at a reasonable price with a fitted in the preamp. You can hook the preamp to active good speakers which will enhance the sound quality which will be better than any record player commercially available.

You can also connect it to components of high quality like the speakers or an amplifier with a turntable. It will provide you with enormous choices which you can use to your benefit and get good sound quality. However, this way you will be spending more money as compared to purchasing a record player.

Wear and tear on records

The tracking force which is usually prescribed caters to about 2 grams of downforce. In the case of record players, the downforce is around 6 grams which is a lot.  The cartridge’s direction is way off. This would make your records’ war and tear much greater than it should be and will potentially damage your records severely over time.

It is easy to adjust the alignment in the case of the turntable and also the taking force. It provides you with an option that ensures the playing of the records with a minimal amount of wear and tear.

Now that you have all the information about the benefits of the turntable and how to hook it up to a receiver, you can just follow the easy steps mentioned above and solve your query.