Are you a vinyl lover who is out there in the market hunting for the best record players for your upcoming endeavors? Or just looking for upgrading your decades-old worn-out record players lying uselessly in your attic with a modern and fancy turntable? 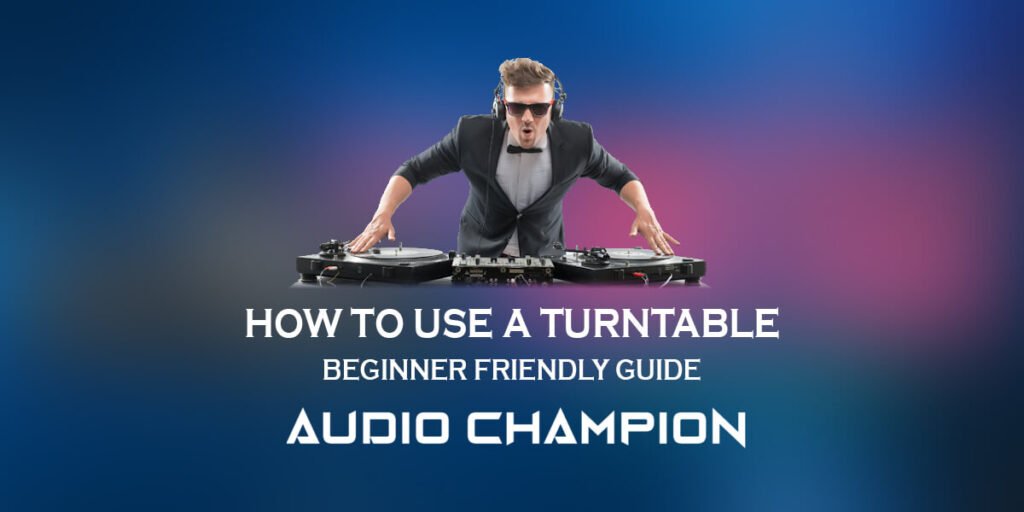 Well, whatever the reason might be, if you have made up your mind about having a record player or a audiophile turntable beside you then you must have to get accustomed to its operation and use. And that’s where, we mark our entrance in your life, to help you assist in your record playing journey by briefing you about how to use a turntable?

Turntables are the modern alternatives to record players or vinyl players and are quite remarkable in their use and performance. They have a quality knock over all their sound playing instruments like the CD players or the MP3. The same goes for their patio which is a bit trickier than the MP3 or CD playing operation.

Although it is trickier than its counterpart, it is quite straightforward and with our help, you don’t have to be worried about any aspect of it and just focus on upgrading your vinyl collection regularly.  Well, here you don’t get your head clear about the distinction between the record player and turntable, only then you would be in a position to proceed without any ambiguity.

The turntable is precisely a small instrument that is tailored for spinning motion on a platform while the record player is a bigger instrument containing in it the turntable and many other necessary parts for sound operation. Another important distinction could be about the nature of these two interchangeable devices.

Just like we have stated earlier that turntable is a small part of the who record player unit but it doesn’t mean it cannot work on its own as it is a standalone device and will be quite functional without any additional help. But it does require hooking it up to any audio source like a stereo device for subwoofers.

The record player, on the other hand, is a fully equipped and functional device and doesn’t need any additional support or accessories as it is already paired with speakers, turntables, a platter, and even a motor. So we can say that turntable despite being a standalone device needs some sort of accessories while the record player is fully equipped and doesn’t leave room for any additional support.

Now that you are clear about the standing of the record player it is time for you to get straight towards the topic that is how to use a turntable? And we have tried to simplify the process for you in upcoming paragraphs. These three simple steps will help you perform your job easily and will be the breakdown of some smaller steps.

How to Use a Turntable

Before starting to get paid you must invest something worthwhile to reap for your efforts and investment and the case is quite similar here too, with turntable’s operation. You must first install it properly and then begin using it for god playing your favorite records or the vinyl collection all the time and at all the places.

The preparatory steps or the installation setup of the turntable could be broken down into the following three steps namely:

This is the foremost step to begin your installation and here you need to arrange the turntable for performance or operation and this demands you to connect all kind of ports and wires that need assemblage well, honestly, there isn’t any hard kind of assemblage when it comes to installing a turntable and you need to take some simple measures like dust covers, etc.

We have simplified the whole process for you in the following simple and swift action, give them a try to hold your place, and save your considerable and precious moments of lifts in setting up instruments for hours.

The first thing that you need to do for plying the record is to get rid of the dust cover for the time being.

All the turntables and even a few record players are coming with protective covering frankly known as dust covers whose role is to protect the instruments from dust and debris. As long as these covers are on, the turntable won’t start operation there you need to get them off and then on again after use.

Place the record at the center of the latter and place it edgewise in a way that it doesn’t make any contact with the grooves, try to use a rubber mat over the record for preventing it against the spin of the platter and the needle as it would most probably get scratched in bits and shred with each use without the protection.

3. Connecting to the Audio Source

After finishing the record player setup it is time to make a connection with an external audio device and for that, you have to pair it with speakers and start playing the record that you have inserted over the platter. That’s all for its use.